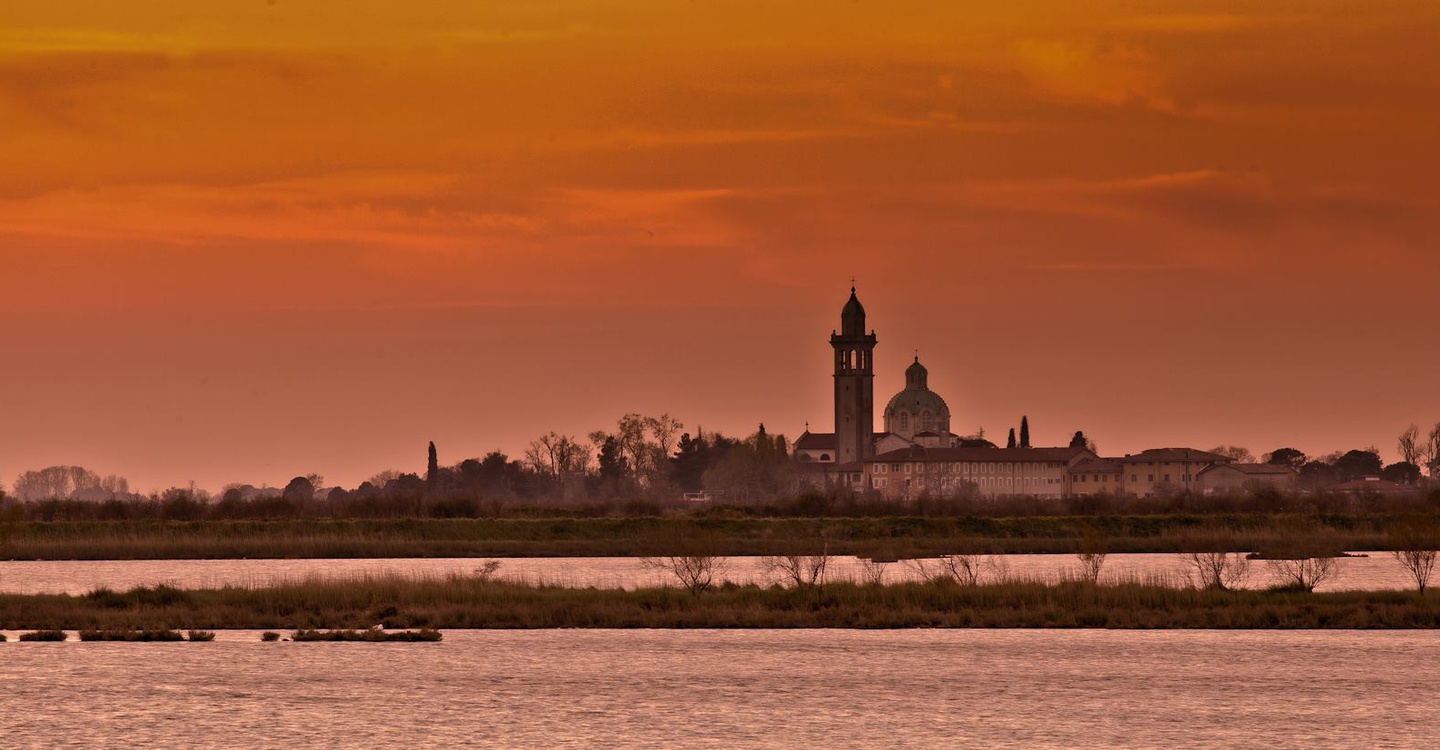 A ferry service connects Barbana and Grado, with more frequent crossings in spring and summer. Private pleasure boats will also take you in approximately 20 minutes to this tiny, 3-hectare island, set amidst the lagoon's peaceful, natural beauty east of Grado.

A top destination for pilgrims, Barbana hosts one of the first Marian sanctuaries, the origins of which date back to the late 6th century, when it appears there was still a strip of land joining the mainland. In fact, it was only referred to as an island in a papal document of 734. History and legend tell the story of a violent sea storm, which left an image of the Madonna on an elm tree on the shore. This icon or statue was found by the hermit Barbano from ancient Treviso. The Patriarch at the time, Elias, ordered a church to be built nearby and once a monastery had been added, Barbano, after whom the island was named, became its prior.

The Benedictines were custodians of the sanctuary for a long time, followed by the Order of Conventual Franciscan Friars, with alternating fortunes, such as Venice’s suppression of the convent in the late 18th century. In recent times, the Friars Minor remained until 2019, and it is now home to Benedictine monks of Brazil's Benedictine Congregation, who founded the Monastery of Santa Maria di Barbana in 2020 with the motto: "ORA ET LABORA".

The current church was rebuilt in the early 20th century in the neo-Romanesque style with vaguely oriental features.  The bell tower stands a little short of 50 metres tall and was inaugurated at the end of the 20s. Today's bells were made by melting down German, Second World War cannons to represent peace. Inside stands an unusual holy water stoup made of red marble from Verona, which portrays the devil crushed by the weight of a large shell containing holy water. The structure is divided into three naves with a wooden ceiling in the shape of an upside-down ship's hull: this shape, found in several churches built along the model of the magnificent Patriarchal Basilica in Aquileia, is said to represent Noah's Ark as a symbol of salvation and protection. Frescoes of the late 30s decorate the hundreds of square metres of the dome with Marian scenes depicting the Sanctuary's origins. The much adored, wooden statue represents Mary as Mother with Baby Jesus on her knee and as Queen on the throne and is the work of an unknown sculptor, dating back possibly to the early 16th century. It is carried in a procession through the island on 15 August and 8 September to mark the Assumption and the Birth of the Blessed Virgin, respectively.

The most famous procession is the traditional "Perdòn” on the first Sunday in July, to commemorate the ancient vow of Grado’s inhabitants to save them from the plague of 1237: the statue of Madonna degli Angeli of the Basilica of St. Euphemia is carried from Grado to Barbana by a boat bedecked with flags and decorated with flowers, followed by a multitude of islanders' and tourist boats across the water. After celebrating mass on the smaller island, the religious procession returns to the larger island and each time it passes, the swingbridge between Grado and the lagoon road towards Aquileia is opened. The “Sabo Grando" festivities are held the Saturday before the procession, with music, traditional songs and toasts, especially in Grado's old town centre.

The Sanctuary preserves a number of different votive offerings, bearing witness to the centuries-old Marian worship by the people of both land and sea. Today, the church displays silver hearts. The Monastic Shop of the complex holds the Sala Ex-Voti, with collections of objects donated by worshippers and votive images with the typical abbreviation P.G.R., in thanks for favours received from people recovering from serious illnesses or to give thanks for lives saved after accidents, fires and natural disasters. In the mid-19th century, the Cappella dell'Apparizione, surrounded by a tiny, charming cemetery, was built close to the Sanctuary in honour of the tenet of the Immaculate Conception. At the time of ancient Aquileia and Gradus, Barbana used to be a Lazaret to quarantine those with infectious diseases, nowadays however, the monastic hospitality of the "Domus Mariae” offers a place of spiritual peace and reflection.